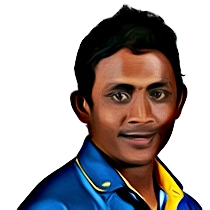 Popularly known as the “mystery spinner” , Balapuwaduge Ajantha Winslow Mendis was born on 11th March 1985. The former Sri Lankan cricketer has represented the Sri Lankan National cricket team in all three formats. Mendis is regarded as one of the best limited over bowlers in the world. Mendis belongs to a hamlet in Moratuwa. He is the third child of five siblings with an elder brother and a sister. He was raised in an orthodox Catholic family. He finished his higher education at St Anthony's College at Kadalana in his village, a place where there were no facilities at all for sports. He eventually went on to study at the Moratuwa Maha Vidyalaya in the year 2000.

Mendis’ skills were initially discovered by the school’s cricket coach named Mr. Lucky Rogers back in the year 1998 during a cricket coaching class, when he was just 13 years old. He represented his school team under 15 cricket team after he was selected to the first eleven team. He also named the school team captain during his early days. Mendis, with a unique variation of leg spin swept away the Best Bowler award at the big-matches twice in 2001 and 2002.

Mendis’ talents got noticed early by the Sri Artillery Cricket Committee after he played a cricket match against the Army under 23 Division 11 during 2003/2004 tournaments. Following which, Mendis was invited to join1 in the regular force of the Sri Lanka Army, this was particularly due to the low number of cricketers from Colombo schools joining the Army in the recent years. He enlisted, partly due to the reason that his father, the bread-winner for the family had died the week before due to a heart attack.

Mendis made his debut against West Indies at Queen’s park Oval on 10th April 2008. Since then, he has played 87 matches and has grabbed 152 wickets with career best figures of 6/13 in a match. Mendis holds an economy rate of 4.8 and an average of 21.87. The mystery spinner also has 3 wicket hauls to his name. Ajantha Mendis, playing his eighth ODI, picked up the first six-wicket haul in the Asia Cup final against India in July 2008. His 6 for 13 is the third-best bowling performance in a tournament final, and the third-best for a spinner in ODIs. He took 17 wickets in the tournament which is still the best bowling effort for an edition of the Asia Cup, not only that he did this at an astounding average of 8.52. He eventually went on to win the man of the match award in the finals as well as the player of the tournament award for his heroics.

Mendis made his Test debut on 23rd July 2008, against India at the Sinhalese Sports Club Ground, Colombo. Instantly, he impressed everyone by scalping 4 important wickets of Rahul Dravid, Anil Kumble, Zaheer Khan and VVS Laxman and finished with figures of 4/72. He then, followed this up with 4/60 in India’s second innings. Mendis’ match figures of 8 for 132 are by far the best by any Sri Lankan bowler on Test debut, beating Kosala Kuruppuarachchi's 7 for 85 against Pakistan in 1985–86. He has played 19 test matches from which he has 70 wickets with a career best figure of 6/99 in an innings and 10/209 in a match. He has an economy rate of 3.09 and an average 34.77. He has 4 five-wicket hauls and 1 ten-wicket hauls to his name.

Mendis made his T20 debut against Zimbabwe at Maple Leaf North-west Ground on 10th October 2008. Since then, Mendis has played in 39 matches and has grabbed 66 wickets with a career best figure 6/8 in a match. He has an economy rate of 6.45 and a career average of 14.42 and 2 five-wicket hauls to his name., Mendis was the third highest wicket taker in the 2009 ICC World Twenty20 in England, behind Pakistan's Saeed Ajmal and Umar Gul. He was also a contender for the “Man of the Tournament” but was surpassed by his teammate Tillakaratne Dilshan. He was eventually named in the 'Team of the Tournament' by Cricinfo for the 2009 T20I World Cup. Mendis is the only bowler to take six wicket hauls in Two Twenty20 internationals till date.

Muttiah Muralitharan once stated "When I started playing Test cricket, I was not as good as Mendis. He is exceptional. He is the future of Sri Lankan cricket". Mendis is genuinely one of the most magical spinners in the Sri Lankan cricket history and he has proved it time and again.