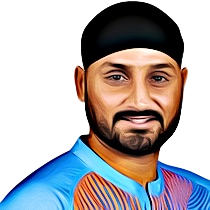 Popularly known as Bhajji or Bhajju Pa by his teammates and fans across the world, Harbhajan Singh Plaha is one of the most prominent off-spinners India has ever produced. Harbhajan Singh is an Indian international cricketer, born on 3 July 1980 in Jalandhar, Punjab, India. Bhajji is known for his effective spin bowling and has the second-highest number of Test wickets by an off-spinner, behind Muttiah Muralitharan of Sri Lanka.

After making his debut in 1998, his career took a downward stroll after several disciplinary incidents and the question about the legality of his bowling action. Before that, he had once been dismissed from the National cricket academy for his indiscipline during his early cricketing years. At the back of all this, it was not easy for him rise and fight back against all the odds.

However, the timing was right, and all the stars were in the right place. In the year 2001, the leading leg-spinner Anil Kumble got injured and India needed an effective spinner. Then captain, Sourav Ganguly called for Harbhajan Singh and so he was included in the Border-Gavaskar Trophy. Harbhajan did not let his captain down and swept off the series from the clutches of the mighty Australians by taking 32 wickets in the series, also becoming the first ever bowler to take a hat-trick in Test cricket.

Bhajji broke into the cricket arena at the mere age of 15 years and 4 months, playing for the Punjab Under-16 state team during the 1995-96 domestic season and took 7/46 and 5/138 against Haryana on debut, setting course for a 9-wicket win for his team. In the next match against Himachal Pradesh, He took 11/79, taking his team to a win by an innings. He finished with 32 wickets from 4 matches. Bhajji made his first-class debut against Services in 1997, during the 1997–98 Ranji Trophy season. The Punjab bowler took a total of 3/35 to help an innings win but was dropped back to the Under-19s the following week. Bhajji then went on to take 5/75 and 7/44 in two matches to earn a recall to the senior team. He continued this performance by taking 7/123 in the next two matches for Punjab to earn selection for North Zone in the Duleep Trophy.

Harbhajan made his debut against New Zealand at Sharjah Cricket stadium on 17th April 1998. Since then he has played 236 matches and has 269 wickets to his name with best figures of 5/31. He has an impressive economy rate of 4.31 and an average of 33.36 . He also has 3 five wicket hauls to his name. Harbhajan has also scored 1237 runs with his bat and was known as a formidable tail ender for his team during his last stints. He took retirement from ODIs after he played a match against South Africa in 2015 at the Wankhede stadium.

Harbhajan made his test debut in on 25th March 1998 against Australia. Since his debut, the magical spinner has played 103 matches, from which he has 417 wickets at an average of 32.46. Harbhajan has an economy rate of 2.84 and has 25 five-wicket hauls and 3 ten-wicket hauls to his name. The tail ender also has 2225 runs to his name including 2 hundreds and 9 fifties. His highest batting score is 115 and he last played a match against Sri Lanka at Galle International stadium on 12th August 2015.

At the second half of his career, Harbhajan played a few integral s as a spinner, mentor, and leader, for the Mumbai based franchise MI - Mumbai. He played an important part in the success of a franchise which went on to win the title thrice. Bhajji was an important contributor of the team since the inaugural tournament 2008. He also went on to lead his side. He picked up 24 wickets in the 2013 tournament and played a crucial role in Mumbai's first title-win. He also played very handy knock with the bat, by scoring 64 off 24 balls against KXIP - Punjab in the 2015 season.

Bhajji pa made his T20 debut against South Africa at the Wanderers stadium on 1st December 2006. In his short stint at the shortest format, He has played 28 matches and has grabbed 25 wickets with an economy rate of 6.21 at an average of 25.32. He also has 108 international runs to his name with 4 sixes and 11 boundaries in his career.

Harbhajan Singh was born into a Sikh family in the year 1980, things were quite different back then. Another interesting fact about Bhajji is that he is the only son of Sardar Sardev Singh Plaha, a businessman who was the owner of a ball bearing and valve factory. He grew up with five sisters. Harbhajan instead of inheriting the family business, focused on his cricket career to represent India and because of that will and determination, we found a world-class spin prodigy who showed the world how it’s done.