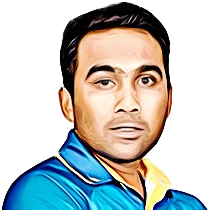 Denagamage Prabodh Mahela de Silva Jayawardene, more popularly known as Mahela Jayawardene is one of the most prolific Sri Lankan batsmen to step into the International arena. Today, we know him as the Sri Lankan cricket coach, but he was also the first player in the history of Sri Lankan cricket to score over 10,000 Test runs. Mahela is also the 2nd Sri Lankan batsman to score more than 10,000 runs in ODIs. In 2006, Mahela made the highest ever score by a Sri Lankan in Test cricket, by scoring 374 in the second Test against South Africa during Sri Lanka's home series.

Jayawardene was named the International captain of the year in 2006 and was again nominated in 2007 as the best Test cricket player if the year. A report prepared by Cricinfo in late 2005 showing that since the cricket world cup in 1999, he had affected the most runouts in ODI cricket and has the fifth highest run-out to match ratio in ODIs. A research has revealed that “c Jayawardene b Muralitharan is the most common bowler-fielder combination in the history of Cricket.

Jayawardene completed his education from Nalanda College Colombo. Mahela’s father, Senerath Jayawardene , introduced him to the sport at an early age when he took him to the Lionel Coaching Clinic run by Nondescripts Cricket Club. This was the place where Mahela Learned to play the game. Mahela made a mark for himself and went on to captain the Nalanda College Colombo first XI cricket team in 1994. He also finished as the first-runner up for the best schoolboy cricketer award during the 1994 cricket season. During the early days of his career, He has played for the Sinhalese sports club since 1995. He was even roped in to play as an overseas player for Derbyshire for the first half of the 2008 English season.

Jayawardene made his ODI debut against Zimbabwe at R. Premadasa Stadium on 24th January 1998. He has played 448 matches since his debut and has scored 12,650 at an average of 33.38. The Sri Lankan legend has 19 hundreds and 77 fifties to his name. Jayawardene became only the second cricketer after Sachin Tendulkar to appear in 600 international matches on 25 February 2014 in an Asia Cup fixture against Pakistan. Jayawardene announced his retirement from longest form of cricket after conclusion of the 2014 Pakistan series. He played his last One-Day innings in Sri Lanka on 13 December 2014 in the last match against England in an ODI series. He was caught on 28 in his last innings at his home ground. Then Sri Lankan skipper Angelo Mathews gave him a tribute by throwing him the ball to take the last wicket. He got his career’s 8th ODI wicket by dismissing James Tredwell through a stumping, with the help of Sangakkara behind the wickets.

Mahela Jayawardene made his test debut against India at the R. Premadasa Stadium on 2nd August 1997. Since his debut, Mahela has scored 11,814 runs from 149 matches at an average of 49.85. The batting maestro has smashed 34 international hundreds, 7 double hundreds and 50 fifties in his whole career and his highest score stands at 374 runs against South Africa which is also the highest test score by a right-handed batsman in the history of Test cricket. Along with his teammate Sangakkara, he recorded most runs for the 3rd wicket in Tests, by scoring 5890 runs leaving behind Rahul Dravid and Sachin Tendulkar’s 5826 run stand, during the first test match against Pakistan at Galle International Stadium, which eventually turned out to be his last test at the venue.

Mahela made his T20 debut against England at the Rose Bowl on 15th June 2006. Since his debut, the former sri Lankan opener has played 55 matches and has scored 1493 runs at a strike rate of 133.18. He has 9 fifties and a hundred under his belt in the shortest format of the game.

Mahela Jayawardene is a name that Sri Lankan Cricket is going to remember for an exceptionally long time. The way he has picked himself up from the downers in his life speaks volumes about this man. He is indeed a Gem for his country and will be dearly missed on the Cricket field.