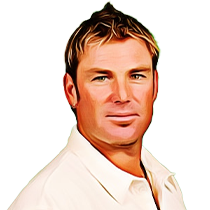 Widely Regarded as one of the greatest bowlers in the history of the game, Shane Keith Warne, was born in Upper Ferntree Gully, Victoria, Australia on 13th September 1969. Today, an Australian commentator and a former International cricketer, once captained the Australian national cricket team in One Day Internationals. Warne was named one of the Wisden Cricketers of the Year in the 1994 Wisden Cricketers' Almanack.

He was named the Notional Winner for Wisden Leading Cricketer in the World in the year 1997. He was banned from International cricket in 2003 after he tested positive for substance abuse. After the ban concluded, Warne was again named Wisden Leading Cricketer in the World for the year 2004 in the 2005 Wisden Cricketers' Almanack. In the year 2000, he was selected by a panel of cricket experts as one of the five Wisden Cricketers of the Century, he was recognized as the only specialist bowler selected in the quintet and the only one still playing at the time. He officially took his retirement from all formats of cricket in July 2013.

Warne had only played in seven first-class matches before making his debut at Test level for Australia. He did not have a dream Test debut at all when he was called into the Australian team in January 1992 to play a Test match against India at the Sydney Cricket Ground. He took just 1 wicket giving away 150 runs off the 45 overs he bowled. He went wicketless, giving away 78 runs in the fourth Test in Adelaide, recording figures of 1/228 for the series, thus was dropped for the fifth Test. Warne’s poor form continued in the first innings against Sri Lanka at Colombo, where his figures were 0/107. However, in match against Sri Lanka on 22 August 1992, he took the last three Sri Lankan wickets without conceding a single run in the second innings causing a second innings collapse and contributing to a memorable 16-run Australian win. This was such big news at the time that Sri Lankan captain Arjuna Ranatunga had to comment in an interview that, 'a bowler with Test average of more than 300 came and snatched the victory from our hands'.

The maestro made his One-day International debut against New Zealand at the Basin Reserve on 24th March 1993. He played 194 ODI matches in his career and took 293 wickets, his best figure being 5/33. His career economy rate stands at 4.25 and his average stands at 25.74 with 1 five-wicket haul.

Shane Warne made his test debut against India at the Sydney Cricket ground on 2nd January 1992. The legend played 145 historic test matches in his career and took 708 wickets in his career at an economy rate of 2.65 and an average of 25.42. His tally includes 37 five-wicket hauls and 10 ten-wicket hauls. His best figures in match stands at 12/128 and 8/71 in an innings.

Shane Warne made his debut in the IPL against the DC - Delhi at Arun Jaitley Stadium on 19th April 2008. Warne led the side to a memorable victory in the first-ever edition of the IPL. It was such a big turnaround for a team that started off as an underdog team on papers, that by next year Warne had created his own fan following in India. The inspirational leader played in 55 IPL matches and was part of the franchise till 2013 before trying his hands at commentary. The legend took 54 wickets in his IPL career and his best figure in match stands at 4/21.

Many critics have mentioned in the past that Shane Warne because obviously he did not have the perfect athletic body. In reality, Warne made sure he was as agile as any other Australian cricketer. He often stood behind the stumps at slip and threw his body at half-chances. He was also an aggressive batsman at the tail-end and fancied his chances with the bat whenever his team required. All in all, Shane Warne was not just a legendary bowler, but a complete cricketer and, let’s not forget how he was nightmare to even the best in the game throughout his career.