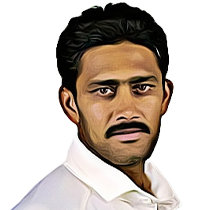 Nicknamed as "Jumbo", India’s most prolific leg spinner Anil Kumble was on born 17 October 1970. A former Indian cricketer, coach, and commentator, who played Tests and ODIs for 18 years has been an important part of the golden era of Indian cricket. As right-arm leg spin bowler, he has scalped 619 wickets in Test cricket and still remains the third-highest wicket taker of all time, behind Muttiah Muralitharan of Sri Lana and Shane Warne of Australia.

In the year 1999, while playing a test match against Pakistan, Kumble took all ten wickets in a Test match innings, joining England's Jim Laker as the only players to achieve this feat. Kumble was not a big turner of the ball Unlike his contemporaries, and relied mostly on the bounce, pace, and accuracy. He was Kumble was selected as the Cricketer of the Year in 1993 Indian Cricket, and one of the Wisden Cricketers of the Year in 1996.

Kumble was also awarded the Padma Shri, India's fourth-highest civilian award in the year 2005. He announced his retirement from international cricket in November 2008 after having played for 18 years for India. He was appointed the chairman of International Cricket Council’s cricket committee in October 2012. Kumble held positions as a chief mentor for the teams RCB - Bangalore and MI - Mumbai in the Indian Premier League between 2012 and 2015. He is also a former head coach of the Indian cricket team as well when the Indian team started off under Virat Kohli’s leadership . He became the fourth Indian cricketer to be inducted into ICC Hall of Fame and is currently the Head Coach and the Director of Cricket Operations of KXIP - Punjab.

Kumble was born in Bengaluru, Karnataka. He soon developed a keen interest in cricket as he grew up watching players like B. S. Chandrasekhar before stepping into the cricket ground. He made his First-class debut at the age of 19 representing the Karnataka team. Next, he was selected to play in the Austral-Asia Cup in the year 1990, before making his Test debut against England later that year. Since then, Jumbo has represented the Indian Test team on more than 132 occasions in test cricket and was responsible for many of India's historic victories. Kumble became a part of the regular ODI team during the early 1990s and held some of the best performances during this time, which included six wickets for 12 runs against the West Indies. The year 1996 proved to remarkably successful for Kumble as he was picked up for the Men’s cricket world Cup and finished the tournament as the most successful bowler; the spin-legend played 7 matches in all and scalped 15 wickets at an average of 18.73.

Kumble made his ODI debut against Sri Lanka at Sharjah Cricket stadium on 25th April 1990. The maestro played in 271 matches for India and scalped 337 wickets at an economy rate of 4.31. His best figure in a match stands at 6/12 and he also holds 2 five-wicket hauls to his name.

Kumble made his test debut against England at Emirates Old Trafford on 9th August 1990. Since his debut, Kumble has been an integral part of the team and has represented India in 132 test matches, taking 619 wickets at an economy rate of 2.7 and an average of 29.65. He has 35 five-wicket hauls and 8 ten-wicket hauls to his name. His best figure in a test match is 14/149 and 10/74 in an innings.

Anil Kumble made his IPL debut for RCB - Bangalore against the RR - Rajasthan at the M Chinnaswamy stadium on 26th April 2008. The spin- legend has grabbed 45 wickets from 42 outings and holds an average of 23.51 and an economy rate of 6.58. His best figure in a match is 5/5.

Anil Kumble has been a phenomenal performer when it came to red-ball cricket. The way he spun the bowl blew away even the greats of the game. Later in the year 2016, life came to a full circle and Anil was appointed as the head coach of the Indian team. Even in his short stint as the head coach, Kumble created miracles and guided India to number one spot in the test ranking.