This Saturday is getting more interesting than a vacation! What match we just had. Now, Super Saturday is moving to Sharjah for Match number 2. It’s the Delhi Capitals vs Chennai Super Kings. This is their second encounter, the first time they met Delhi defeated Chennai by a healthy 44 runs on these slow pitches. Both these teams are on the opposite side of the table and are in contrasting situations. While Chennai have won 3 matches out of 8, Delhi are settled at the second spot with 6 wins and 2 losses. Delhi is on a particularly good streak and are moving up the ladder with each match. On the other hand, Chennai, even after playing 8 matches is struggling to find its feet in the tournament and the panic buttons might start blinking soon. Delhi suffered a defeat against table toppers Mumbai but then came back to winning ways when the beat Rajasthan Royals in their previous encounter. Chennai are also coming off a win against Hyderabad and they will be also on in a competitive mood. This will be a good contest!

Both these teams have played against each other on 22 occasions in the IPL so far, and Chennai leads the win record by 15-7 over Delhi. Chennai are three-time title winners, while Delhi are still hoping to play their first final and this maybe their chance, they have an exceptionally good team, and they are winning more matches than others.

The match will be played at the Sharjah Cricket stadium, UAE. Here, Teams batting first have an upper hand generally. The pitch has got good bounce, and the ball does not do much here, so both teams will look to earn some extra runs at the beginning.

Moreover, dew will also play an important factor so whoever wins the toss will look to bat first. The ground is short and has 60-meter boundaries in long on and 55 meter in straight and 65-meter boundary in mid-wicket. This is good news for both teams as both teams have some really good hitters in their arsenal. This could be a high-scoring match after all. 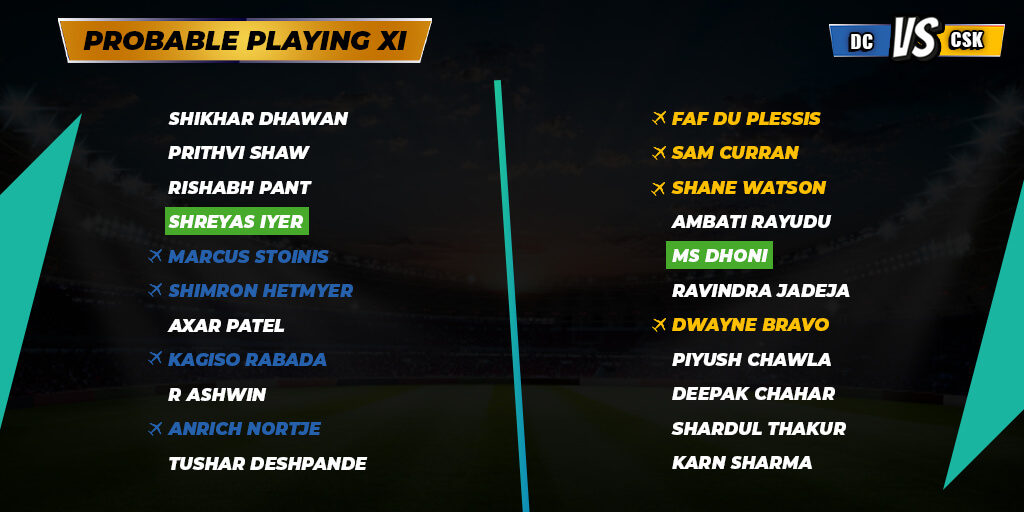 The best part about the Delhi Capitals is that there batting line-up looks strong on paper as they have four Indian batsmen in their arsenal with the likes of Shreyas Iyer, Shikhar Dhawan, Prithvi Shaw and Ajinkya Rahane. Ajinkya has not found a place in the playing XI but may soon find a spot given his skills. Hetmyer has not looked his usual self so, he may lose out on his spot to Jason Roy. Shikhar is looking good after the last match so that’s good news. They also have a handy all-rounder in the form of Marcus Stoinis who has done phenomenally well for them in the past, so the middle-order looks sorted.

CSK will eagerly be waiting for their Skipper MS Dhoni to fire some sixes and will cross their fingers hoping the star batsman makes some useful runs going forward in the tournament. If he performs in  today’s match they would like to think, they have a chance. They also have a few other explosive batsmen in Faf Du Plessis, Shane Watson and Dwayne Bravo but Watson is not scoring. Kedar Jadhav provides some really good stability to the middle-order and of course there is Ambati Rayudu who can tackle the tail-end with Ravindra Jadeja. The tail is deep, and CSK knows that and will look to capitalize on it.

When it comes to bowling Delhi capitals is not far behind. They have got some exceptional talent in this department. Kagiso Rabada and Anrich Nortje have done really well to keep the team afoot along with Marcus Stoinis. Amit Mishra has been refreshing to watch this season as well youngster Avesh Khan. It will be great if Ravichandran Ashwin can join the party soon. Also, it will be interesting to see if they bring in Ishant Sharma in this contest to strengthen the line-up.

Sam Curran is on the points table in the league with good number of wickets under his belt for the CSK in the tournament. Piyush Chawla is looking good with newfound confidence in the CSK camp and will get a bit of help from fellow spinner Ravisrinivasan Sai Kishore. Deepak Chahar has shown a lot of promise since the first match of the league and he will be matching steps with either Lungi Ngidi or Dwayne Bravo, both are looking in a decent touch this season. Imran Tahir has not found a spot in the team yet; the fans really want to know when he will come out in the yellow jersey. He could add a lot to this side.

CSK are desperately trying to find their feet in the tournament, with 5 losses on their back. They are barely looking like the team they actually are. The funny thing is every time they think one of their departments is doing really well in a match, another lets them down.  If they really want to win this, they will have to come all guns blazing and that is looking like a far cry as of now.

Delhi, on the other hand, will be coming into the match knowing that CSK are low on confidence and therefore the former will try to dominate the match from ball 1. Their batting order is strong, but the middle order will have to fire tonight, and the bowling will have to support equally.