It is time for Match number 31 of the Indian T20 league 2020 at the Sharjah. Bangalore are in for another busy night as they play their 3rd game in 6 days, but they will be beaming with confidence after winning 5 matches so far. On the other hand, Punjab will be coming after a break of 4 days but are on a 5-match losing streak. They are placed at the bottom of the table with just one win and they will have to give it their all to revive their fortunes! They will have to bring back the heroics they showed in their previous clash against the RCB when they won by 97 runs. They are facing a real issue with their bowling and are not taking enough wickets. Chris Gayle will be available for tonight’s match which means Maxwell may make way for him as he hasn’t performed at all in this edition.

Bangalore, on the other hand are looking like a stable side after the inclusion of Chris Morris. Both their departments are looking stronger than their previous encounters and they will be looking to win this one and take a step closer towards the playoffs.

Both teams have faced each other on 25 occasions in the IPL so far, and Punjab holds a 13-12-win record over RCB. Both teams have never won an IPL title and will be looking to change that in this edition. RCB is looking like a strong contender this year and has a good chance of going to the playoffs, while Punjab is struggling at the bottom of the table and need to back themselves up and probably win all their games to justify any sort of qualification.

Some Interesting stats to look at:

• Most wickets for RCB: 20 (Yuzvendra Chahal)

• Most wickets for KXIP: 4 (Murugan Ashwin)

• Most catches for KXIP: 4 (Mandeep Singh) 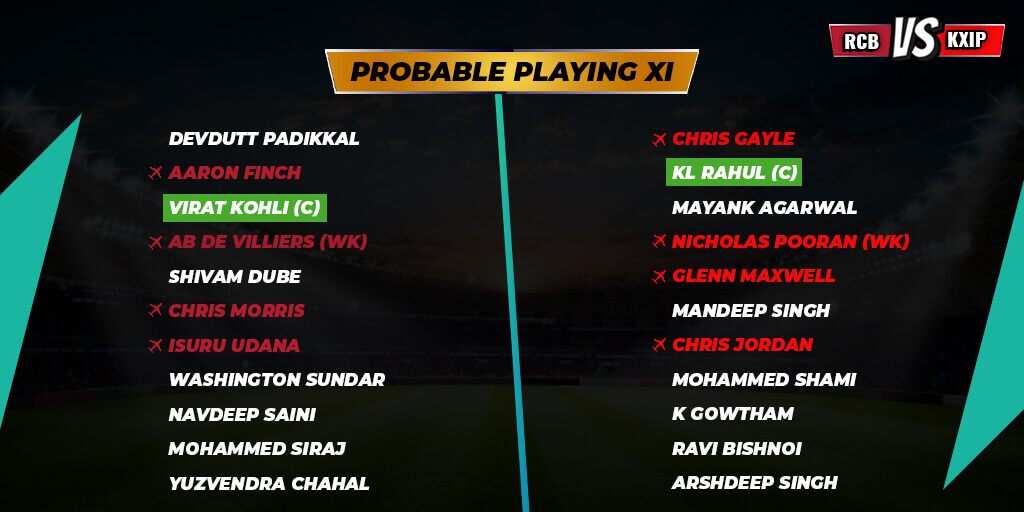 The match will be played at the Sharjah Cricket stadium, UAE. Here, Teams batting first have an upper hand generally. The pitch has got good bounce, and the ball does not do much here, so both teams will look to earn some extra runs at the beginning.

Moreover, dew will also play an important factor so whoever wins the toss will look to bat first. The ground is short and has 60-meter boundaries in long on and 55 meter in straight and 65-meter boundary in mid-wicket. This is good news for both teams as both teams have some really good hitters in their arsenal. This could be a high-scoring match after all.

Captain KL Rahul and Mayank Agarwal has been in an exceptional form and they both bring in a  lot of strength to the top order with Karun Nair backing them at number 3. Glenn Maxwell and Nicholas Pooran provide some power hitting in the middle but Pooran will have to better than what he is doing so far. James Neesham and Sarfaraz khan will add some stability at the tail and one of them will have to stick till the death overs to put pressure on the opposition.

The RCB boast of some really strong batsmen including the best batsmen in the world Virat Kohli and AB de Villiers in their line-up and the good news is that Virat is back! If they want to go for some interesting options for tonight, there is Aron Finch and Moeen Ali and also a certain Josh Phillipe. Youngsters Devdutt Padikkal, Shivam Dube, Pawan Negi, Shahbaz Ahmed and Washington Sundar provide them plenty of options to choose from and these boys are getting good exposure. Parthiv Patel has not yet seen the light of the day yet. They also have some formidable all-rounders in the form of Chris Morris and Isuru Udana. The batting department looks sorted, they just need their skipper to fire tonight and they are good to go for a strong finish in every match in the future.

Mohammed Shami is leading the points table for the KXIP till now with the highest number of wickets under his belt and is a strong contender for the Purple cap when the tournament concludes, however these are still early days. Arshdeep Singh and Ravi Bishnoi are both exciting talents and are looking in good touch, they will have to learn how contain the batsmen and restrict the sixes and fours and they are good to go. Last but not the least Sheldon Cottrell has shown some sparks at the beginning and can destroy any batting attack on his good day. Punjab will be hoping he fires some guns today and does his famous celebration.

The Bangalore team looks as strong in the bowling department as they are in the batting department. Navdeep Saini has been phenomenal to watch and did an exceptional job in their previous match, bowling in the death overs. Umesh Yadav is going through a rough patch but is still looking promising. Dale Steyn is looking like a mere shadow of the kind player he is and may soon turn things around for himself.  Mohammed Siraj and Kane Richardson add a lot of depth to the line-up while the star of the show this year has been Yuzvendra Chahal with some really good performances and the purple cap contender for his team.

KXIP have a well to do side if we ignore their current situation. They have all the guns they need their arsenal, but the point is that nothing seems to work for them at the moment. Nicholas Pooran made a quickfire fifty in one of the matches and the openers are doing whatever they can to keep the team afloat, but this isn’t enough to win a big match especially against the team they have lost more than half of the encounters. This is going to be one hell of a match for the Punjab team. They will have to be on their toes in every department to win this match.

RCB, on the other hand, are coming off 5 wins from their last encounters and are high on confidence. They will look to dominate the game tonight and will do everything it takes to put points on the table.