Its the third weekend of the month and the Saturday is jam-packed with a double-header! In the first game, Bangalore go against the Royals in Match number 33 at the Dubai International stadium. Bangalore suffered a loss against Punjab in their last game. Their batsmen did quite well make a total 170 runs, but the bowlers got smashed for a lot of runs. The game went down to the wire. The have 5 wins on their back from 8 matches and they can still keep calm. Rajasthan made some sort of comeback by winning spectacularly against the Sunrisers. Even against Delhi, they looked like the side to beat. They have 3 wins from 8 matches and will look to capitalize on this match. The Royals desperately need a win.

Both the teams have faced each other on 22 occasions in the IPL so far, and Rajasthan holds a 10-9-win record over the Bangalore. Rajasthan have already won a title  in 2008 but RCB on the other hand have never won a title and will look to change this in this edition.

• Most wickets for RCB: 14 (Yuzvendra Chahal)

This match is going to be played at the Dubai International stadium. We have seen in the past that this has been a slow pitch and spinners get a lot of help here. We may get to see a couple of good knocks from both the teams because both of them have played here before. There will be dew coming in the second innings and will help the team bowling first. 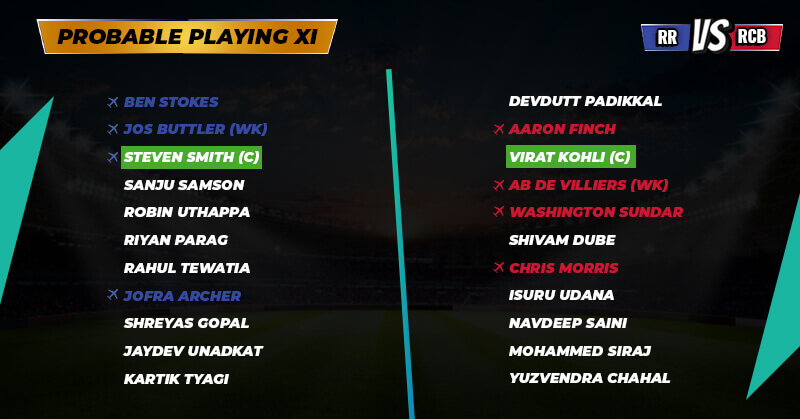 The RCB boast of some really strong batsmen including the best batsmen in the world Virat Kohli and AB de Villiers in their line-up and the good news is that Virat is back! If they want to go for some interesting options for tonight, there is Aron Finch and Moeen Ali and also a certain Josh Phillipe. Youngsters Devdutt Padikkal, Shivam Dube, Pawan Negi, Shahbaz Ahmed and Washington Sundar provide them plenty of options to choose from and these boys are getting good exposure. Parthiv Patel has not yet seen the light of the day yet. They also have some formidable all-rounders in the form of Chris Morris and Isuru Udana. The batting department looks sorted, they just need their skipper to fire tonight and they are good to go for a strong finish in every match in the future.

There are some explosive batsmen in their line – up in the form of Steve Smith, Jos Butler, Robin Uthappa, David Miller, and Ben Stokes, however Robin has failed to fire this season and stokes is in Quarantine. Another problem is that Jos Butler and  Smith are not firing with the bat and that is an area of concern.  They also have young guns like Sanju Samson  and Rahul Tewatia who have played some explosive innings in this edition and have showcased some really good skills. Rajasthan Royals have struggled to finish matches in the past so they’ll be looking for some stability in the batting department and will look to finish matches more comfortably.

The Bangalore team looks as strong in the bowling department as they are in the batting department. Navdeep Saini has been phenomenal to watch and did an exceptional job in their previous match, bowling in the death overs. Umesh Yadav is going through a rough patch but is still looking promising. Dale Steyn is looking like a mere shadow of the kind player he is and may soon turn things around for himself.  Mohammed Siraj and Kane Richardson add a lot of depth to the line-up while the star of the show this year has been Yuzvendra Chahal with some really good performances and the purple cap contender for his team.

They have bunch of good options in their bowling line-up. Starting off with Jaydev Unadkat, Varun Aron, Jofra Archer and Shreyas Gopal. Then there is Ankit Rajpoot who has been doing a decent job lately. Andrew Tye is also present in the line-up and it will be interesting to see how they use the Australian. The bowlers have done a decent job for the Royals so far but to move up in the points table they would need their bowlers to restrict the opposition to a small total so that the batting department can finish the job.

Both teams are placed at good positions and both are hungry to win this one. RCB are looking like a much more stronger unit with a lot good batsmen in their line-up. Their bowling has also improved over the past and they will looking capitalize on their bowling. Rajasthan, on the other hand are somehow getting by till now. Their bowling have looked really pale apart from Jofra Archer and their batting has a lot to do.