What a night it was! The first qualifier was a belter of a contest and this league just keeps on getting better every day! Mumbai thrashed Delhi in last night’s match to make a cruising entry in the finals while Delhi would be really cautious in their next game because another loss will mean they will lose out on their dreams of winning the title. Tonight is going to be another good night for all the cricket fans around the world as the Royal challengers Bangalore will take on the Sunrisers Hyderabad in an eliminator game at the Abu Dhabi stadium at 7:30pm IST. Both teams look equally balanced and equally motivated to move on to the next level. Whoever wins tonight will play the Delhi Capitals in the semi-final of the Indian Premier league 2020. While Kohli’s men have proved all their critics wrong this season and have come back strongly to hold a respectable position on the points table, the Sunrisers Hyderabad have made a comeback in the tournament from nowhere after Bhuvneshwar Kumar, Mitchell Marsh and Vijay Shankar all succumbed to injuries. Both teams deserve share the stage and both have their struggle stories to back their contention, so it will be interesting to see who makes it to the semi-final!

Both teams have faced each other on 17 occasions in the IPL so far and Hyderabad holds a 9-7-win record over the Royal challengers Bangalore. While the Sunrisers Hyderabad, entered the tournament few years later from the inaugural edition, they still have managed to win one IPL title for themselves whereas in spite of being a veteran in the league, the RCB has not yet claimed their first ever league title. However, the Bangalore franchise has done much better in this season and are looking like a team that could win the title, it will be interesting to see how the much-awaited match unfolds.

The match will be played at the Sheik Zayed stadium, Abu Dhabi. This ground has always been termed as a good pitch for batting. The sky will be clear for a perfect eliminator, however the due could set in as the match progresses. Teams batting second on this pitch have won more matches statistically speaking, but in a match like this you never really know. The average 1st innings score on this pitch is 156, but looking at both the sides, this could be another high-scoring match.

The RCB boast of some really strong batsmen including the best batsmen in the world Virat Kohli and AB de Villiers in their line-up and the good news is that Virat is back! If they want to go for some interesting options for tonight, there is Aaron Finch and Moeen Ali and also a certain Josh Phillipe. Youngsters Devdutt Padikkal, Shivam Dube, Pawan Negi, Shahbaz Ahmed and Washington Sundar provide them plenty of options to choose from and these boys are getting good exposure. Parthiv Patel has not yet seen the light of the day yet. They also have some formidable all-rounders in the form of Chris Morris and Isuru Udana. The batting department looks sorted, they just need their skipper to fire tonight and they are good to go for a strong finish in every match in the future.

SRH has both stability and attack in their batting line-up with Johnny Bairstow and David Warner at the top and Williamson coming in at number 3. The good thing about this team is that they are full of all-rounders with Mohammed Nabi, Jason holder, Vijay Shankar, and Rashid Khan. However, a team can pick only 4 foreign players, so it’ll be interesting to see who they pick for this contest. There is  Fabian Allen whom we haven’t seen yet. There is Manish Pandey who provides additional stability to the middle-order and there are some interesting young guns Abdul Samad and Abhishek Sharma and of course under-19 prodigy Priyam Garg.

The RCB looks as strong in the bowling department as they are in the batting department. Navdeep Saini has been phenomenal to watch and did an exceptional job in their previous match, bowling in the death overs. Umesh Yadav is going through a rough patch but is still looking promising. Dale Steyn is looking like a mere shadow of the kind player he is and may soon turn things around for himself.  Mohammed Siraj and Kane Richardson add a lot of depth to the line-up while the star of the show this year has been Yuzvendra Chahal with some really good performances and will be a key factor in this match for his team.

SRH has always been touted as one of the best bowling units the league. They always maintained the discipline in their bowling attack in the past. This year, they are backed by bowlers like  Bhuvneshwar Kumar, Rashid Khan, Billy Stanlake, Mohammed Nabi, and Vijay Shankar. Also, both Khaleel Ahmed and Thangarasu Natarajan are looking in good touch. They also hold some interesting talent on the bench with the likes of Siddharth Kaul, Shahbaz Nadeem and Sandeep Sharma. They just have to find the perfect mix! 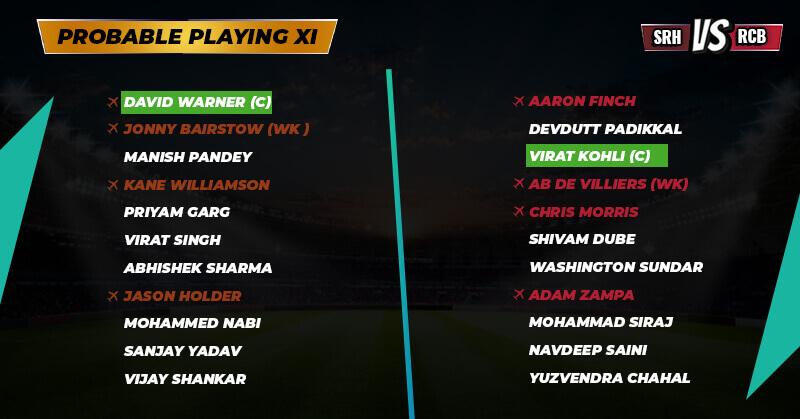 If we look at the team sheets, it’s clear that both teams are equally poised in all departments. While the Sunrisers Hyderabad has explosive openers at the top, RCB has a solid middle-order to back any score. Bowling on both sides have finally found their mix after coming a long way in the league.

The most interesting part would be to see who bats first, because a good score will set it up for a cracker of a contest between both these teams. Hold on to your T.V sets, this one is going to be a nail biter!