What a tournament we have had this year! When nobody thought it would be possible, the BCCI came to the rescue and announced an IPL with social distancing norms. This was made possible by a huge team working behind the idea. Surely, this league brought a bit of light in our lives midst these tough times. The league took off with a lot of uncertainty with a few players and staff members testing positive initially but gladly, everything went well, and we had a spectacular time watching our favorite teams play. As we predicted earlier, the two best teams in the tournament are finally here at the biggest stage there is, after beating all odds that came their way. We bet you haven’t enjoyed a Tuesday like this one before, because it’s the Mumbai Indians taking on the Delhi Capitals at the Dubai International Stadium and they will be playing for the Indian Premier League title tonight! Yes, the finale is here!

This will be the fourth time these two teams will meet this season with Mumbai winning the previous three encounters. While Mumbai have reached where they are quite comfortably and have lost just 5 matches in the league till now, Delhi has struggled a lot comparatively to reach the final. The good news is, they have finally found good batting mix which could really help the tonight against the mighty Mumbai Indians who barely have missed a slot. So, if we look at it, It’s the Delhi Capitals who will have to play their hearts out keep Mumbai away from a fifth title.

Both teams have faced each other on 26 occasions in the IPL so far, and both are tied at a 14-12-win record over each other. Delhi is not looking like a weak team anymore unlike previous editions, they have carried their momentum from their last year’s performance and are going really strong in the tournament. They are looking like a side that can win the title this year, but do they have what it takes to beat the four-time champions Mumbai Indians who are strong mentally having done it so many times. This match could be like a trailer for a big knock match in the league later on!

Here are some interesting facts to look at :

The match will be played at the Dubai International Cricket stadium, Dubai. Here, Teams batting first have an upper hand generally. The pitch will be slow, but the ground is smaller, so both teams will look to earn some extra runs at the beginning.

Moreover, dew will also play an important factor so whoever wins the toss will look to bat first. The ball will spin which is good news for both the teams, given the fact that both teams have some really good spinners in their line-up.

Defending champions Mumbai will be relying heavily on their top order as well and skipper Rohit sharma will have to fire with his bat along with partner Quinton De Kock, both are looking in sublime touch. Although, the former is looking in a great form and is capable of taking the match away, the latter has failed to fire in the past and will have to find his strengths in this final. Suryakumar Yadav could be the star of the show looking strong in the middle while Ishan Kishan is in the form of his life and will look to strengthen the middle order. Then, there are Pandya brothers and Kieron Pollard. This looks like a dangerous batting attack and the if they click, we may see a high-scoring match tonight at the Dubai International stadium.

When we talk about the Delhi Capitals, their batting line-up looks strong on paper as they have four strong Indian batsmen in their batting line-up with the likes of Shreyas Iyer, Shikhar Dhawan, Marcus Stoinis and Ajinkya Rahane. Ajinkya has finally found a place in the playing XI and may fire tonight. Shimron Hetmyer has started to pick up some pace. Shikhar is looking like he is in the form of his life after last few matches so that’s good news. They also have a handy all-rounder in the form of Marcus Stoinis who has done phenomenally well for them in the last match and will be the main guy for them tonight when he comes out to open the innings, so Delhi looks strong enough to take on the final challenge.

Their bowling department is looking strong enough to take on the Delhi capitals. Jasprit Bumrah has displayed why he is the best bowler in the world as he has been maintaining a low economy throughout and will be their go-to bowler in the death overs, there is no doubt about that. He’ll be accompanied by Trent boult and James Pattison who are doing exceptionally, given their last outings.  They have Rahul Chahar in the spin department accompanied by Anukul Roy and Jayant Yadav. It will be interesting to see how they pick their mix of spinners on this spinning pitch. Delhi capitals have a lot of hitters in their batting line-up so it will be hard to contain them.

When it comes to bowling Delhi capitals are the team to look at. At this point one can say that because they indeed are the most fitted bowling side in this edition.  They have already got some exceptional talent in this department. Kagiso Rabada and Anrich Nortje have done really well to keep the team afoot by firing some loose Cannons. Ravichandran Ashwin has been refreshing to watch this season as well youngster Avesh Khan. The good news is that Marcus Stoinis  has joined the party and is a serious threat. Also, it will be interesting to see if they bring in Ishant Sharma in this contest to strengthen the line-up. 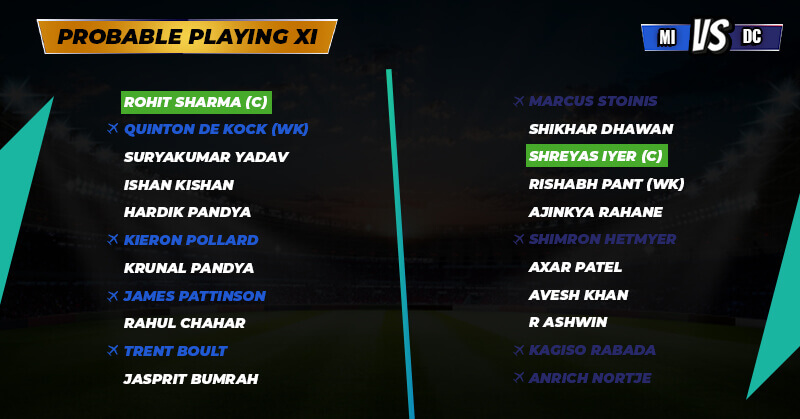 Mumbai have looked phenomenal in the tournament, but they will also keep in mind that Delhi are coming off a good win against the SRH. The good thing is that their batting has picked up pace and now every batsman right till the tail end is contributing which makes them an extraordinarily strong batting line-up. Not many teams have been able to contain them till now, and if there is one team that can not only contain them but also take crucial wickets, that would be Delhi. Delhi has been in sublime form when it comes to their bowling attack, They have all the guns ready in their arsenal from spin to pace, from Ashwin to Rabada.

Delhi has won 9 out of their 15 games and will be riding on that confidence while Mumbai will be looking to end their winning-run and claim the number one spot. Both teams look hungry here and it is really hard to put your fingers on one team.